“It is the great challenge for Ahmadi Muslim scientists and researchers to revive the honour and dignity of Islam in the global academic arena.” – Hazrat Mirza Masroor Ahmad , Khalifat-ul-Masih Vth (aba) 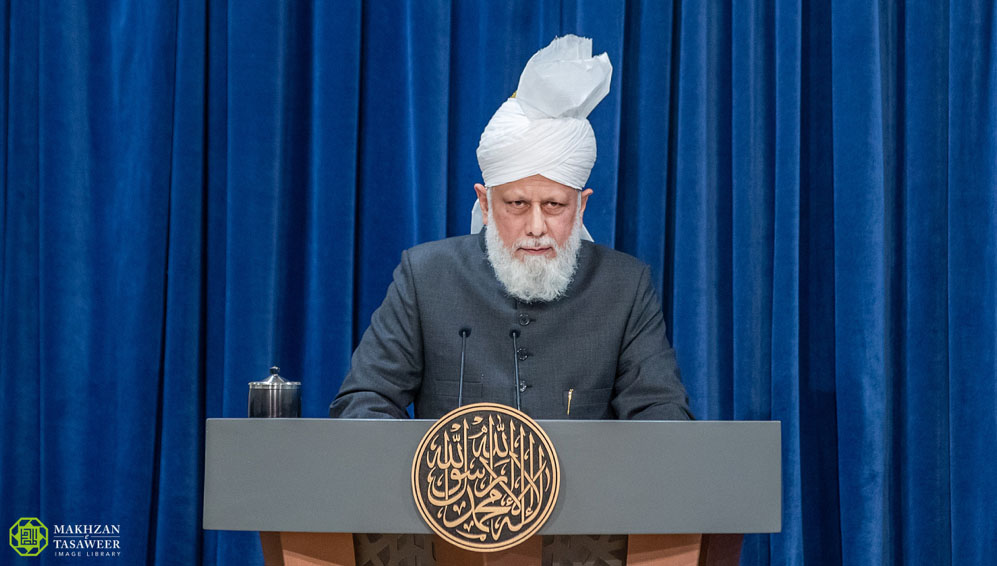 The conference saw a multitude of well-known researchers and field experts from within the Ahmadiyya Muslim Community deliver lectures and talks on matters of research and academic findings to scholars, researchers and budding minds of the Community.

Topics of discussion included ‘The Quran and Science’, economics, surgical development, conflict resolution and botany. Nine countries, including the United States and Russia, were represented at the conference.

In an inspirational concluding address, Hazrat Mirza Masroor Ahmad spoke about how the Holy Quran instructed Muslims to ponder and deliberate over the Universe, and that doing so would lead to a firmer belief in God and also help establish further proofs of the existence of God.

Commencing his address His Holiness recited verses 191-192 of Surah Al-e-Imran of the Holy Quran which state:

“In many verses of the Holy Quran, including those just recited, Allah the Almighty has mentioned the creation of the Heavens and the Earth and He has instructed us to reflect upon the true purpose of our creation.” 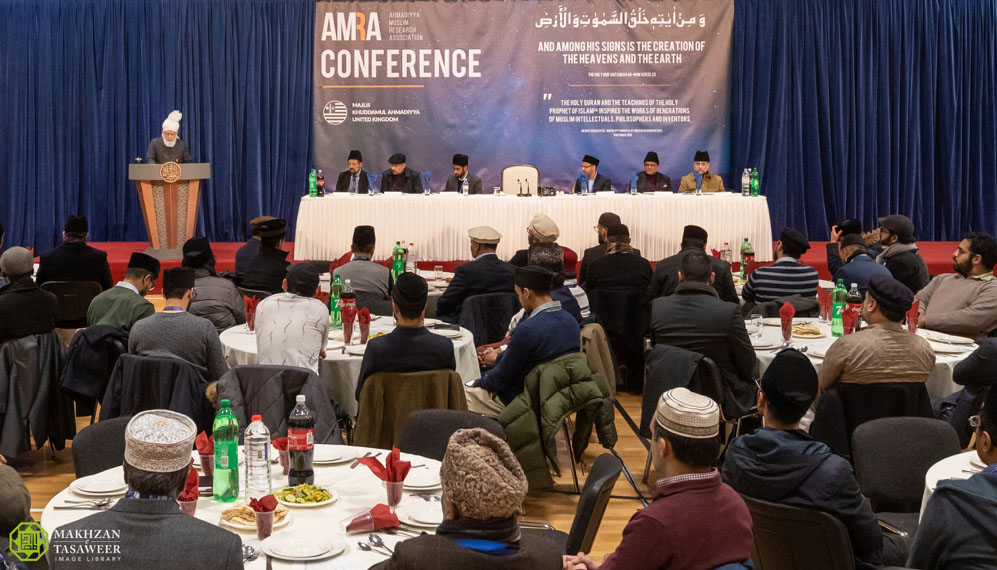 “He has encouraged us to use our brains and to ponder upon His creation and to search for new roads of human progress and innovation through research and reflection.”

Elaborating upon the reason why humans have been declared to be ‘the best of all creation’ His Holiness said:

“Unique amongst all creation, Allah the Almighty has given mankind the insight to appreciate that whatever He has created has been made for our benefit, on condition that we use it in the right way.”

Shining light on the teachings of The Promised Messiah (peace be upon him) Hazrat Mirza Masroor Ahmad said:

“The Promised Messiah (peace be upon him) has stated that when a believer studies and ponders over the celestial bodies and the entire Universe it causes their minds to open up and for them to become enlightened. The result is that they are led towards a firm belief in the existence of God Almighty, as they see the signs and evidence for His existence all around them.”

“A righteous person is not satisfied by merely identifying the dimensions of the world, its material form or calculating the gravitational forces or pull of the planets or material objects. Nor are they content by simply determining the main characteristics of the sun, the moon and the stars. Rather, a true believer will continually strive and struggle to observe and understand the perfect harmony of nature and the world around us.”

“He or she will have an unquenchable thirst to identify the hidden characteristics or potential of the physical world and, as they realise its brilliance and perfection, they will inevitably be drawn towards their Creator and their faith in the existence of God Almighty will be enhanced.”

Hazrat Mirza Masroor Ahmad also impressed the need and importance to seek God’s blessings and help when embarking along the path of research in order ‘to further understand and unlock the mysteries of the Universe’.

“In order to attain His blessings and Help, they (believing Muslims) remember Him, whilst standing, whilst sitting and whilst resting, just as has been described as the state of a righteous believer in the verses of the Holy Quran just recited. When they pray to Allah for guidance, He grants them clarity of thought, He enlightens their minds and washes away the haze of incomprehension that previously existed.”

“He grants them an understanding of the Universe and planets and they come to recognise with certainty that such a perfect and precise natural order could never have come about by chance or on its own. Rather, it is a reflection and indicator of a Great Creator. Indeed, it is a testament to the existence of a Universal Creator.”

Alongside establishing a personal belief in the existence of God, His Holiness explained that knowledge will also enable one to explain this pivotal concept to others.

“Once a believer gains such knowledge and insight, he or she is not just able to guide others about the latest scientific developments, rather they will also be tooled with the armoury to prove to the world the existence of that One God, who is the Creator of all Creation.”

Thereafter, Hazrat Mirza Masroor Ahmad cited the example of the first Muslim Nobel Prize winner, Professor Dr Abdus Salam, who he said ‘spent his life and used whatever insight he gained as evidence to prove the existence of God’.

“All Ahmadi researchers or academics should continually keep in view the Oneness of God Almighty before, during, and after conducting any research or study…When they research in this way, and seek the Help of Allah the Almighty at each step, no doubt He will assist them at every juncture and be their guiding light.”

Hazrat Mirza Masroor Ahmad explained that Islam ‘instructs believers to explore, to investigate and to utilise their intellect and God-given faculties’, but warns against ‘interfering with the laws of nature or from seeking to modify the creation of Allah through unnatural means’.

Elaborating upon this, Hazrat Mirza Masroor Ahmad presented the example of genetic engineering and cloning.

“In recent years, the boundaries of scientific ethics have gradually eroded, whereby there have been attempts to pursue immoral and dangerous pursuits such as genetic engineering and the cloning of living creatures. The results of such undertakings, where humans far exceed their limits and seek to ‘play God’, will surely be catastrophic and be the means of driving mankind towards its destruction.”

“This is something every Ahmadi Muslim researcher and scientist must guard against. You must only pursue those avenues that are for the benefit of humanity and which are according to the limits prescribed by Allah the Almighty.”

Hazrat Mirza Masroor Ahmad also spoke about how ‘during the Middle Ages, countless Muslim scientists, philosophers and intellectuals left an indelible mark on humanity by advancing the cause of human knowledge and understanding.’

“Their pioneering efforts brought about a remarkable revolution in the world and their research and discoveries continue to be the basis for modern science and mathematics.”

The article identified some of the many contributions of Muslim scientists in the early period of Islam, particularly those to medicine, the brilliant works of Ibn Sina and which described the Muslim city of Cordoba to have been the ‘most cultured city in Europe’ and ‘a great centre of study and exploration’.

“Over time, as Muslims moved away from God Almighty and the qualities associated with a believer diminished rapidly amongst them, the Muslims, who had previously led the world in science and research, gradually moved to an age of intellectual ignorance that persists to this day.”

“Instead of continuing to be the leaders of innovation and discovery, the period of Muslim academic enlightenment drew to an end and the Muslims relied on the discoveries and modern technologies made by others. Instead of being those who gave to the world, the Muslims became those who only took.”

Hazrat Mirza Masroor Ahmad said it was up to Ahmadi Muslim scientists to lead the effort to revive the spirit of scientific endeavour and discovery within the global Muslim community.

“At this time of intellectual ignorance amongst the Islamic world, it is the great challenge for Ahmadi Muslim scientists and researchers to revive the honour and dignity of Islam in the global academic arena. Indeed, it should be your ambition to take up the glorious mantle of enlightenment adorned by the great Muslim scholars and inventors of the Middle Ages.”

“Having gathered here and held this conference, you must all consider it your mission to pursue excellence within your chosen field. You must leave here with a firm determination in your hearts to follow in the footsteps of Dr Abdus Salam and those outstanding Muslim scholars and researchers who left behind a rich legacy of knowledge many centuries ago. You must reflect upon how you can develop a greater understanding of the world and develop new technologies or systems through which humanity can benefit.”

“May we soon come to witness the dawn of a new Islamic golden age of intellectual progress and advancement led by Ahmadi Muslims across the world. Ameen.”

Precious Advice From Huzoor to Waqifeen-e-Nau