During his addressed, Hazrat Mirza Masroor Ahmad highlighted several pressing issues faced across the globe and presented a road map to achieving lasting world peace in light of the teachings of Islam. 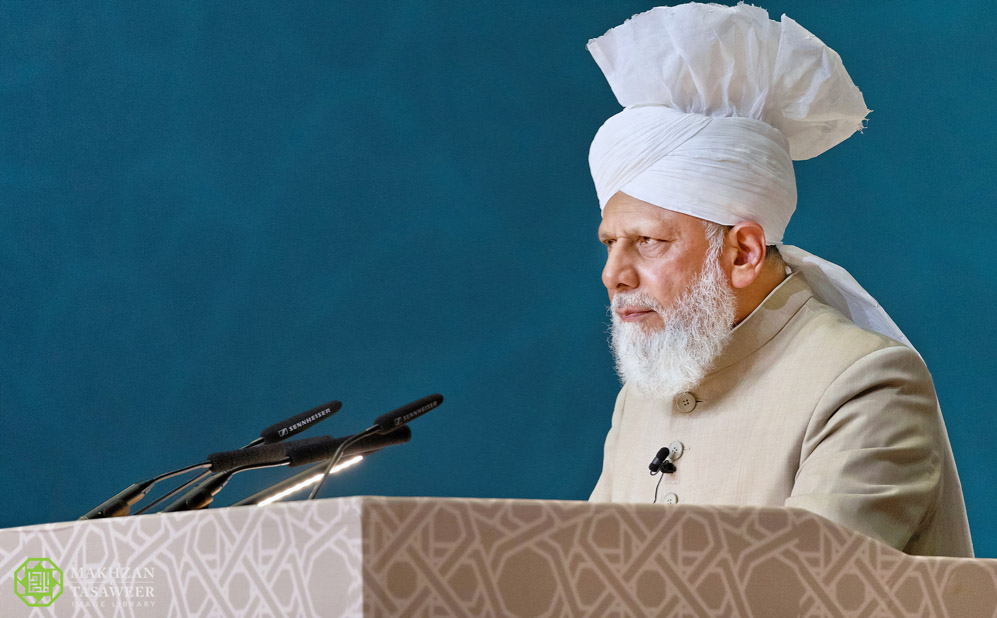 Before addressing the main theme of the address, His Holiness spoke about the purpose of the Jalsa Salana, the establishment of the Ahmadiyya Muslim Community and the advent of the Promised Messiah (peace be upon him).

“The Ahmadiyya Muslim Community is a sect within Islam that was founded for the sake of the spiritual reformation of mankind, in accordance with a prophecy of the Founder of Islam, the Holy Prophet Muhammad (peace and blessings be upon him) regarding the latter days.”

Explaining the need of a spiritual reformer to the guests in attendance, His Holiness said:

“It is a natural phenomenon that applies not only to secular organisations but also to religious communities that, with the passing of time, the adherents of a particular movement or belief system begin to deviate from their original teachings and move away from their core beliefs. As a result, there comes a time in the life of all groups or communities when they need reviving. Otherwise, they will eventually die away or morph into something that bears no resemblance to their initial state.”

Speaking about global peace, His Holiness explained that the want for peace, security and comfort is universal to us all and it is a part of human nature to desire one’s “village, town or city to be harmonious and secure.”

His Holiness explained that despite this desire for peace, not just at a local but international level, the current state of the world continues to be mired in conflict.

“Ultimately people desire for the entire world to be peaceful, however in spite of this instinctive desire for peace, the truth is that division, disorder and conflict has spread to every part of the world, for instance there are nations being torn apart by civil wars, insurgent groups are fighting one another, or targeting the State.”

His Holiness spoke about how injustice, societal rifts and growing tension on all levels are driving us further and further from global peace.

“Fractured societies are becoming ever more polarised and are rapidly reaching a breaking point with tensions threatening to boil over at any point. At an international level, various nations are competing with one another in an effort to gain power and control.  For the sake of attaining economic or geo-political power, or in order to force people with different values or beliefs to bend to their will, unjust wars are taking place.”

“A desperate yet very tangible fear is that what we are witnessing today could, at any moment, escalate into a truly global catastrophe whose dire consequences are far beyond our imagination. In our selfish quest for wealth and power, we are ruthlessly destroying the prospects of today’s youth through a never-ending stream of perpetual injustice and savage cruelty.”

Speaking about the rise of dangerous nationalism and the far right, Hazrat Mirza Masroor Ahmad said:

“Increasingly, the far-right poses a profound and ominous threat to the peace and well-being of Europe and other parts of the world. Far-right members, in the name of nationalism, advocate an end to modern-day multicultural and pluralistic societies and instead seek to impose their own racist and prejudiced ideologies on society.”

“Intolerant bigots are viciously targeting immigrants many of whom have lived peacefully in their adopted countries and contributed to its success as model citizens.”

His Holiness explained that he had been exhorting people for many years to pay greater attention towards the real threats to global security, and that now many academics and experts were also writing and speaking to the same effect.

In this regard, His Holiness referenced several academics, diplomats and experts.

On the importance that ought to be given to the threat of a nuclear war, His Holiness cited the views expressed in an article written by Professor Tyler Cowen, an Economics Professor at George Mason University.

“One of the most striking facts of today’s world is that young people do not seem to worry very much about nuclear war. Climate change is by far the larger concern, while nuclear war is seen as a threat of the past…In contrast, I am inclined to think that the risk of nuclear war remains the world’s No. 1 problem, even if that risk does not seem so pressing on any particular day.”

Speaking about issues specific to the German people His Holiness referred to a study made by Deutsche Welle which found climate change and not global conflict to be the greatest concern of the German people.

“A recent survey published by Deutsche-Welle found that the issue German people are most concerned about is climate change but, personally, I agree with the sentiments of the aforementioned academic that the risk of warfare, and most especially nuclear warfare, is the most pressing issue of our time.”

His Holiness spoke about how some people maintain religion to be the main cause of conflict. Responding to these accusations, Hazrat Mirza Masroor Ahmad said:

“The various studies and articles I have quoted demonstrate that the blame for the world’s lack of peace and security cannot be put at the door of any religion, whether Islam or otherwise. Rather, there are a myriad of economic, geo-political and social issues which are all playing a role in undermining the world’s peace.”

His Holiness made mention of the global economy and stressed that reforms should be made on the basis of justice and integrity.

“A decade on from the global financial crisis, the European countries should not think that their national economies are secure or that the capitalist system is thriving. Even Western experts and economists are accepting the shortcomings of their financial system.” 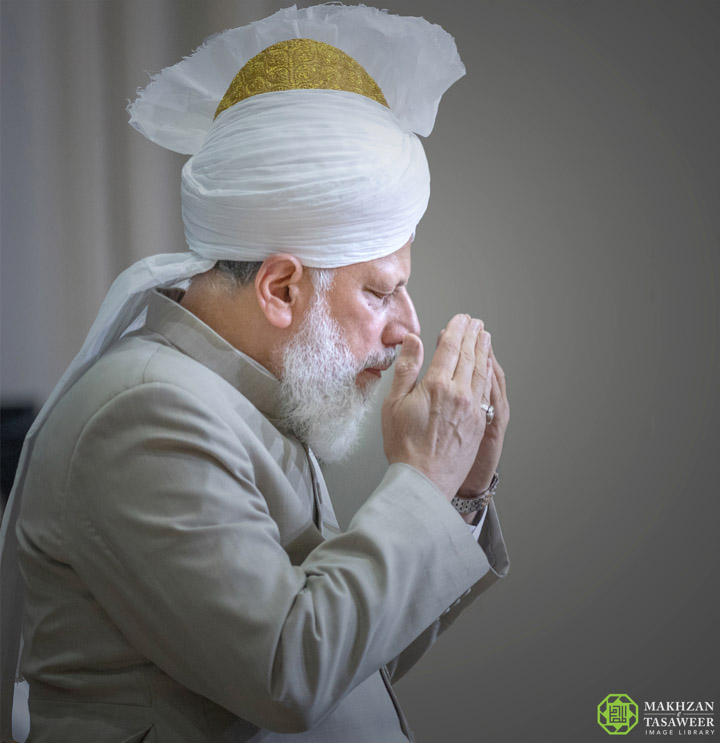 “The capitalist system is slowly losing its status and people are realising that there are inherent risks and injustices embedded within it. European countries and the other major powers should not arrogantly presume that their economic system will remain pre-eminent forevermore. Rather, they should be working to ensure that fairness and equality underpin the world’s financial system.” 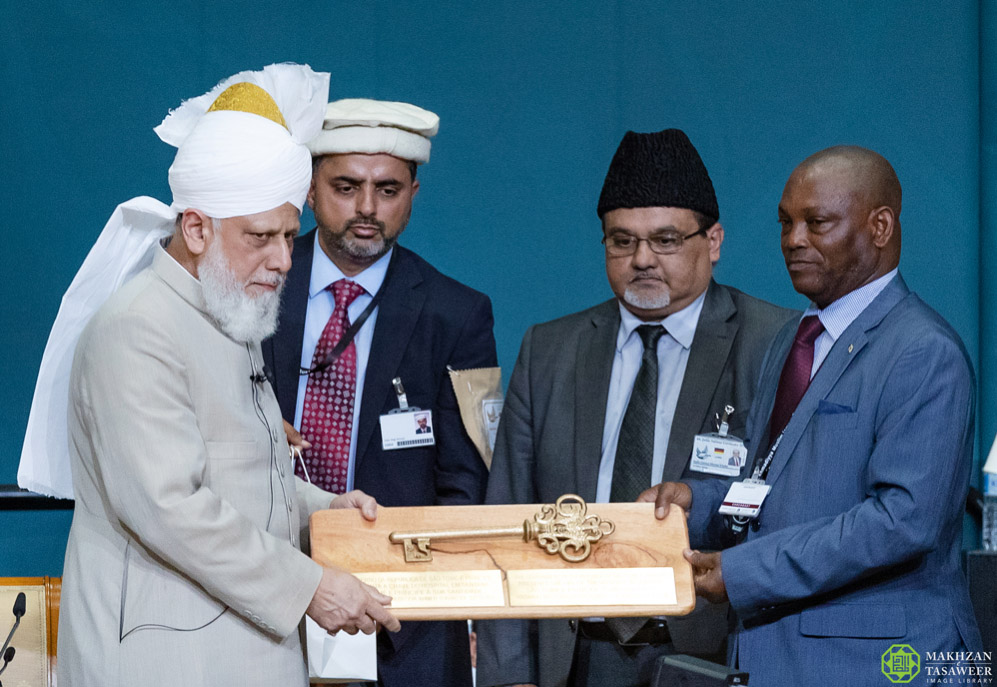 His Holiness then went on to speak about the issue of immigration. His Holiness highlighted that studies have shown that the German labour force is heavily dependent upon sustained immigration.

“To blame immigrants for all of a country’s problems is entirely unjust and the truth is that many wealthy Western nations would be at grave risk without immigration. The reality is that all nations are dependent upon one another and that we are now living in an increasingly inter-connected and globalised world. Instead of seeking to build barriers or to isolate ourselves, it is essential that nations and people of different backgrounds co-operate and work together for the common good.”

“Governments should make proper plans to ensure that countries work in harmony with each other and that, at a domestic level, immigrants are helped to assimilate and integrate.”

His Holiness went on to speak about the conflicts inflicting the world and highlighted that to blame Islam or any other religion is a result of ignoring a multitude of causational factors.

“The world’s peace is being undermined by a variety of factors, such as the one-eyed policies of political leaders and governments who place their personal and national interests above fairness and equity. Such injustice can never lead to peace and prosperity.

“The various studies and articles I have quoted demonstrate that the blame for the world’s lack of peace and security cannot be put at the door of any religion, whether Islam or otherwise. Rather, there are a myriad of economic, geo-political and social issues which are all playing a role in undermining the world’s peace.” 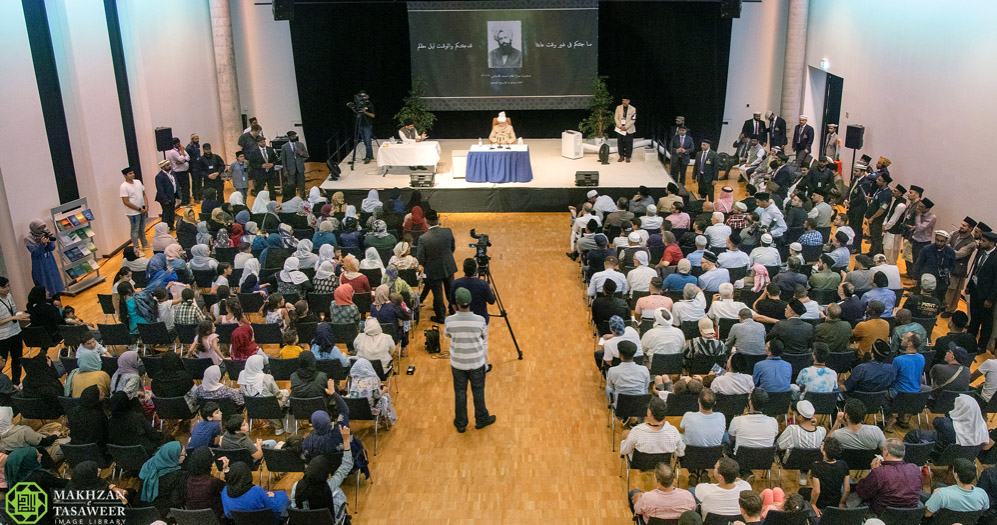 Towards the end of the address, His Holiness emphasised the need for humanity to fulfil the rights of God and the rights of their fellow man.

“At this critical moment in history, I believe with all my heart that there is only one way to bring an end to the great challenges of our time. There is only one path that can lead us to salvation and deliver us from this world of war and conflict and that is the path of God Almighty.”

“I pray that we set a positive example for those who follow us so that the coming generations seek to live in peace, rather than being those who stoke further conflict and division and for whom all roads leading to prosperity and success are sealed.”

“I pray that may the dark clouds of war and enmity hovering ominously all around us give way and may they be replaced by eternal blue skies of peace and prosperity in all parts of the world.”

During the afternoon session, Urino Jose Botelho, representative of Sao Tome, presented His Holiness with a key to a new hospital on behalf of the President, Manuel Pinto da Costa.

Humanity First will refurbish the hospital and then run it as a means of providing healthcare to the local people. Mr Botelho thanked His Holiness for the humanitarian efforts of Humanity First in Sao Tome whilst also inviting him to Sao Tome for the opening of the new hospital.

Earlier in the day, His Holiness, Hazrat Mirza Masroor Ahmad directly addressed the members of Lajna Imaillah (The Ladies Auxiliary Organisation of the Ahmadiyya Muslim Community).

His Holiness strongly and comprehensively responded to critics of Islam who claim that Islam fails to give equal rights to women, and spoke about the essential practices of repentance, worship and patience.

“It is merely the ignorance of the opponents of Islam that they try to allege that Islam does not provide equal gender rights…vAnyone who thinks that Islam has not given rights to women, in reality has no knowledge of the true beautiful teachings of Islam.” 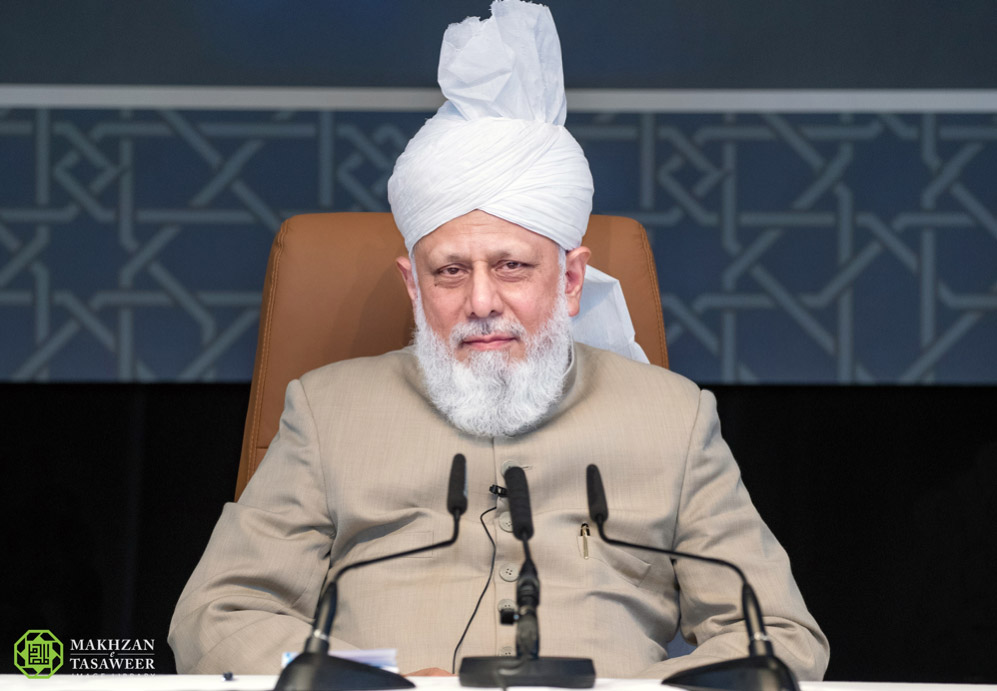 “It is God’s justice that both men and women receive respective recompense for their respective actions. Certain matters are compulsory on men in accordance with their state, which are not compulsory in the same way for women. Allah has given us a list of our duties and responsibilities, detailing the duties of men and the duties of women in society.”

During his address, Hazrat Mirza Masroor Ahmad placed particular importance on the need for practical implementation of the good and pious teachings and commandments of Islam. His Holiness explained that empty emotions and momentary passions without action hold no value.

“Every year you meet at gatherings, hold classes for moral training, or organise the Jalsa, and become happy over the number of attendees and the fact that the Caliph of the time has addressed the convention. However, if this is mere temporary passion, then this is futile. Temporary passion is useless, until and unless you endeavour to make piety a part of your life.”

Later in the day, His Holiness met with delegations from Georgia and various Arab countries. The delegations included guests, as well as people who had accepted Ahmadiyyat in recent times.

Precious Advice From Huzoor to Waqifeen-e-Nau