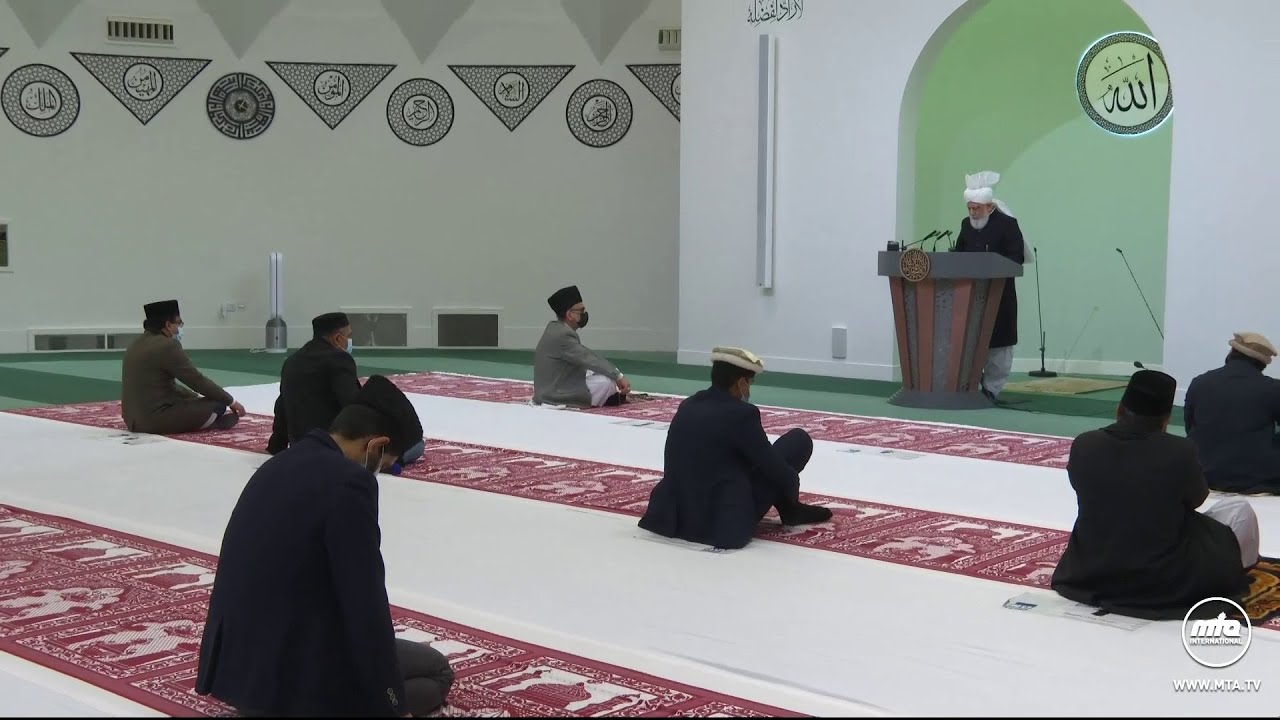 Ramadan – Understanding the Philosophy of the Acceptance of Prayers

The prescribed fasting is for a fixed number of days, but whoso among you is sick or is on a journey shall fast the same number of other days; and for those who are able to fast only with great difficulty is an expiation—the feeding of a poor man. And whoso performs a good work with willing obedience, it is better for him. And fasting is good for you, if you only knew.

The month of Ramadan is that in which the Quran was sent down as a guidance for mankind with clear proofs of guidance and discrimination. Therefore, whosoever of you is present at home in this month, let him fast therein. But whoso is sick or is on a journey, shall fast the same number of other days. Allah desires to give you facility and He desires not hardship for you, and that you may complete the number, and that you may exalt Allah for His having guided you and that you may be grateful.

And when My servants ask thee about Me, say: I am near. I answer the prayer of the supplicant when he prays to Me. So they should hearken to Me and believe in Me, that they may follow the right way.’ (2:184-187)

His Holiness(aba) then said that by the grace of Allah, we are once again blessed to be going through the month of Ramadan. It is not however to simply go through the month of Ramadan, nor does simply eating at the time of closing the fast and at the time of opening the fast fulfil the purpose of fasting. Rather, God Almighty has said that we must attain righteousness.

His Holiness(aba) said that in the verses which he recited, God has explained that fasting is an obligation. At the same time, God has stated that those who are ill or travelling are not required to fast but can complete them at a later time. And those who cannot fast should pay the fidyah. Even if one is able to complete the fasts at a later time, it is still a good practice to pay the fidyah.

Condition for Prayers to be Accepted

His Holiness(aba) said that God also says that He hears the prayers of the supplicant. However, if one wishes for God to listen to them, then we too must listen to God and act upon His commandments.

His Holiness(aba) said that he would present some excerpts from the writings of the Promised Messiah(as) regarding the philosophy of the acceptance of prayers and the conditions associated with it. There are many of us who pray on the surface, and then think that God is bound to hear and fulfil our prayers, and then become sad when the prayers are not answered. What must be realised is that we must first strengthen our faith and relationship with God, and analyse ourselves to see whether or not we are acting upon His commandments. We must see whether we are steadfast, or do we falter at the slightest hardship and trial.

His Holiness(aba) presented a quote of the Promised Messiah(as) in which he stated that prayer is not the mere utterance of words, rather it is to fill the heart with the fear of God. It is when the soul of the supplicant flows like water to the threshold of the Divine and one seeks the strength to combat one’s weaknesses. It is to bring about a sort of death upon one’s self. It is then that the door of acceptance is opened upon the supplicant.

How to Know When Prayers are Accepted

His Holiness(aba) said that many ask how can we know that we have been forgiven and God has accepted our prayers. Here, the Promised Messiah(as) has stated that when one supplicates in the true sense and has endeavoured to establish a lasting relationship with God, then one can be sure of this. His Holiness(aba) said that we should strive to achieve this especially during the month of Ramadan.

His Holiness(aba) further quoted the Promised Messiah(as) who said that God Almighty has stated and promised that those who strive in His way will attain His nearness. God has also taught us the prayer ‘Guide us to the right path’. This means that one must strive a great deal and pray fervently keeping this in mind. Furthermore, it is stated that one who is spiritually blind in this world will be blind in the hereafter. This can include one who blindly adhered to a religion simply because they were born into that faith. Such people do not possess ‘spiritual sight’ nor do they possess love for the faith. Therefore, we must prepare our ‘spiritual sight’ from our time in this world so that we may have sight in the next.

His Holiness(aba) said that during these days, we should especially pray ‘Guide us to the right path’ so that we may become true servants of God and truly serve his creation, rather than becoming like those extremists who cause harm to others in the name of God and His Messenger (sa). His Holiness(aba) prayed that may God save us from the evil of such people.

His Holiness(aba) said that some people think they have become so far steeped in sin that they can no longer be forgiven. Because of this thought, they continue to commit further evil deeds, whereas this is merely a thought placed in their minds by Satan. His Holiness(aba) quoted that Promised Messiah(as) who said that one should never think that they have committed so many wrong deeds that they cannot be forgiven. In fact, the cure to committing evil deeds is prayer and that is the only way to eradicate Satan. Otherwise, one continues along with this thought and eventually ends up drawing towards atheism. Therefore no matter what, one should turn towards prayer, and Ramadan is the perfect opportunity to focus on this.

Do not Become Disheartened When Praying

His Holiness(aba) continued quoting the Promised Messiah(as) who said that one should not become disheartened if they feel that their prayer has not been answered exactly as they had desired. God does hear our prayers, but He is not bound by our desire, and does not need to fulfil our prayers exactly as we desire, for He knows best. It can be likened to a child who asks his mother for something which is harmful for him. There is no doubt that the mother loves her child, but she would never grant the child what he has asked if it is harmful. The philosophy of the acceptance of prayer is similar. God knows what is best.

His Holiness(aba) said that regarding the conditions for the acceptance of prayer, the Promised Messiah(as) has stated that one who requests another to pray for them, they themselves should first ensure to always establish the fear of God within themselves and adopt righteousness. It is then that the door for acceptance is opened. If this is not done, then the door is closed not only for them, but also for those whom they have requested to pray for them.

His Holiness(aba) said that furthermore, in order to have prayers accepted, one should do good deeds. Regarding this, the Promised Messiah(as) said that one should exhaust all efforts in doing good works and reforming one’s self.

His Holiness(aba) said that it is necessary for the means to be created, for which we should pray. This is what we have been taught in the prayer ‘Thee alone do we worship and Thee alone do we implore for help’. It cannot be that one prays and their thirst is automatically quenched, rather water is sent down as a means by which their thirst is quenched. God has created the need for means so that it may be known that everything has been created with a purpose.

His Holiness(aba) quoted the Promised Messiah(as) who said that there are two types of mercy or grace of God; Rahmaniyyat [graciousness – the general grace] and Rahimiyyat [mercy – the special grace]. Under Rahmaniyyat, God created all that is required to sustain life even before its creation, and things which mostly humans benefit from. Thus the first includes that which was created before our creation, before anyone could even pray for such things. Then there is Rahmiyyat, under which, when we pray, and God accepts the prayer. This grace is related most to prayer. It is the quality of humans to seek from God and it is the quality of God to accept the prayers. God gave us the means under Rahmaniyyat such as the heart, tongue, eyes, ears etc. so that we could use them appropriately and seek from God and be heard under his special grace Rahimiyyat. Therefore, we must use that given to us under Rahmaniyyat in the best possible manner and use these blessings to reap the special grace of God which is through His attribute of Rahimiyyat.

The Importance of Prayer and Supplication

His Holiness(aba) said that regarding the importance of prayer and supplication, the Promised Messiah(as) said that just as when a child cries and his mother runs towards him to give him milk, such is the manner in which God hears a supplicant who cries at His threshold. God Almighty wants us to come to His threshold, all He requires us to do is to establish the qualities whereby our prayers can be accepted.

His Holiness(aba) said that these were just a few excerpts which he presented from a treasure of knowledge. If we implement these things, then we can bring about a revolutionary change in our lives and establish a strong relationship with God. This Ramadan, we should strive to attain the nearness of Allah, to act upon His commandments, to strengthen our faith, to understand the philosophy of prayers, to reform ourselves, and to be included amongst those whose prayers are accepted by God. This Ramadan should bring about a great change in our relationship with God.

The Benefits of Praying for Others

Summary prepared by The Review of Religions.

Claims and Teachings: Ahmad, The Promised Messiah and Mahdi (as)