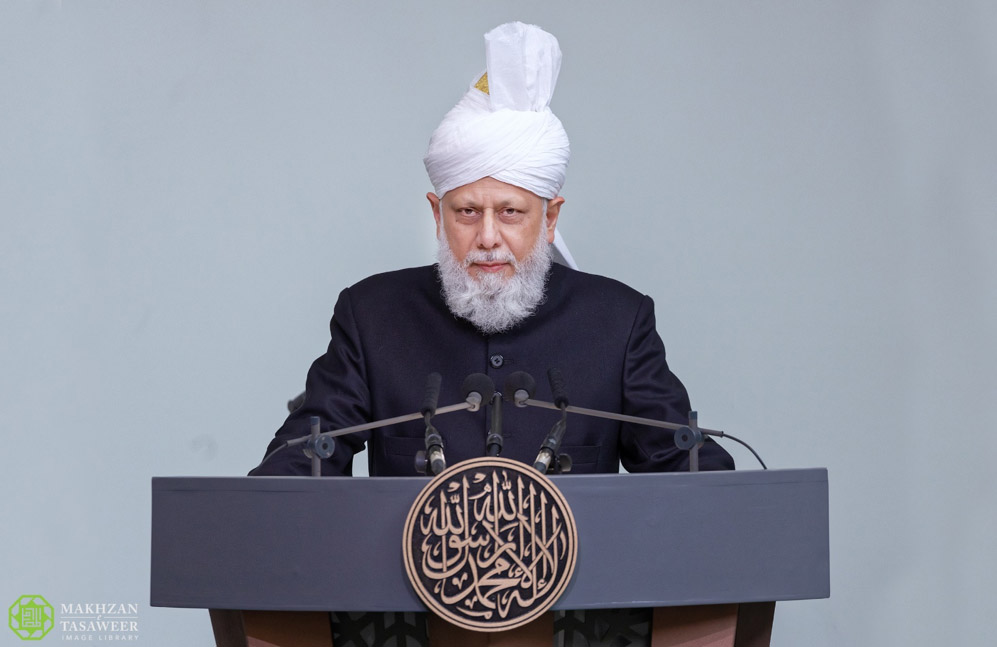 Following the outbreak of the Coronavirus, the World Head of the Ahmadiyya Muslim Community, the Fifth Khalifa (Caliph), His Holiness, Hazrat Mirza Masroor Ahmad drew attention towards adopting precautionary measures against the virus and becoming more devoted towards God.

Speaking at the Mubarak Mosque in Islamabad, Tilford during his Friday Sermon delivered on 20 March 2020, His Holiness said that the outbreak of the Coronavirus (Covid-19) is forcing people to consider the limitations of human endeavour and may lead to people being drawn back towards religion and a return to faith.

His Holiness quoted several media articles published in the recent days about the impact of the Coronavirus on society and how the 21st century has seen an exponential rise in infectious diseases.

Amongst others, His Holiness quoted a recent article published in the Daily Telegraph, in which columnist Philip Johnston writes how the world has been turned upside down in the span of a couple of weeks. The columnist spoke of how the virus had exposed the vulnerabilities of the seemingly impregnable might of Western society.

His Holiness said that after highlighting that these are extraordinary times unimaginable to those born after World War Two, Mr Johnston concludes:

“How many times have we heard people say “Everything will be OK because scientists will work something out”, whether it be global warming or the pandemic? We are about to find out whether such optimism is justified. If it isn’t then I might be heading back to church.”

“This virus has forced people to think about returning towards God. The true God and the Living God is that of Islam. He is the One Who has announced that He will guide those Who make an effort in coming towards God. He has stated that he will come fast towards those who take even one step towards Him and has said that He will take them into His shelter.”

“In these circumstances, not only does it become more important for us to reform ourselves, it also becomes incumbent to increase in informing others about the peaceful message of Islam… We must tell people that for the ultimate result to be good, we must turn towards God and realise that true life is that which is in the Hereafter and we must not associate any partners with Him and fulfil the rights of His creation”

Furthermore, His Holiness once again cautioned all members of the Ahmadiyya Muslim Community to strictly follow the precautionary measures and instructions of the government and health authorities.

Amongst other measures, His Holiness said that the elderly and those suffering from illnesses should avoid leaving their homes as much as possible and Ahmadi Muslims should only pray in their local Mosques in smaller gatherings rather than the central Mosques where more people come into contact with one another.

His Holiness also said that in addition to drinking plenty of water, people should rest sufficiently and adopt a healthy diet avoiding junk foods.

After emphasising the significance of the precautionary measures that should be adopted, Hazrat Mirza Masroor Ahmad said:

“The ultimate tool we have at our disposal is that of prayer. We should all pray for the entire world that Allah the Almighty may save mankind from the harmful effects of this virus. Furthermore, may Allah grant health to all Ahmadi Muslims alongside the ability to become stronger in their faith.”

Khalifathul Masih addresses over 5,500 Muslim youths from across the UK.